MAKING THE MOST OF YOUR ALFALFA

We at Renk clearly feel we have the best alfalfa on the market but good management is crucial to getting the highest return. Here are a few key points to remember in raising alfalfa:

Alfalfa likes a firm seed bed and should be planted very shallow, 1/4” to 1/2” on medium to heavy soils and 1/2” to 1” on sandy soil. Seeding rate should be around 12-15 pounds per acre (use higher rates if seedbed is in poor shape). Direct seeding is recommended unless fodder is needed or you are planting on highly erodible ground. Due to autotoxicity, alfalfa fields should be out of alfalfa for at least one year before reseeding with alfalfa.

Alfalfa performs the best when soil pH is 6.5 to 7.5. In most cases, this requires lime to be applied at least one year before going into the ground with alfalfa. Proper pH improves availability of phosphorous and potassium and increases activity of nitrogen-fixing Rhizobium. Having adequate phosphorous during the seeding year is key for establishment. Potassium levels should be closely monitored throughout stand life as this nutrient likely has the most effect on overall yield. Each ton of alfalfa removes the equivalent of 150 pounds of 0-10-40 fertilizer. The nitrogen needs of alfalfa should be adequately taken care of by Rhizobium bacteria that colonize the roots and fix nitrogen from the air.

When alfalfa stands fall below 40 stems per square foot (at 6″ growth), yield potential becomes limited and no longer profitable. Rotating the field is highly recommended at this point.

For the best combination of high-yield and high-quality, first cutting should be taken at bud stage (mid to late May). The second cutting should be 28-33 days later or mid-bud stage. The third cutting 38-55 days later or 25% bloom. Leave only 1” of stubble, if possible, with your equipment. An optional fourth cut can be taken mid to late-October after a killing frost, but 6” of stubble should be left behind to help prevent a winterkill. No cutting is recommended from September 1 to mid-October, as this leaves the stand vulnerable to not having enough root reserves to weather the winter if a killing frost comes in that time period.

Losses after harvest can be as high as 30% so following proper management is important. Keep equipment tuned to minimize mechanical losses and follow proper moisture guidelines: bale hay at 18-20% and ensile at 50-70%. Silage inoculant can be very effective in preserving silage quality (see chart to the right), especially when field drying times are under two days.

Weed control is very important the seeding year but, after that, the return on spraying is less economical. Spraying older stands does little to change tonnage but may improve quality based on weed species being killed.

The main insect pest to monitor in the Midwest is the Potato Leafhopper which moves up from the south and does damage to the second and third crop. Normally, it is economically justifiable to spray once or twice for Leafhoppers.

If you would like more details on alfalfa management, contact our office for a complimentary management guide. 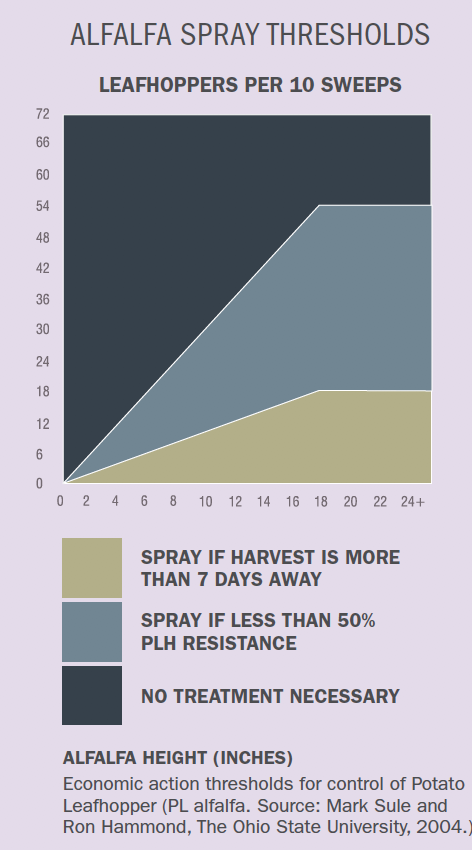