Halfway there! Yield and quality changes of corn silage during challenging first-half environments 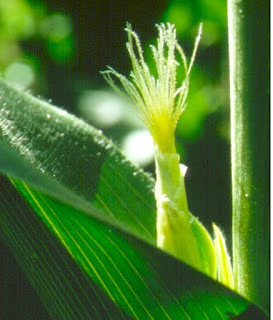 The middle of July marks the halfway point of the corn life cycle. Pollination is upon us and the ultimate yield and quality potential of the 2022 corn crop will be determined. A lot can happen yet but we are entering the pollination period in good shape across most of Wisconsin.

Corn forage yield is shown in Figure 1. Overall, corn silage has yielded 10.8 Tons of Dry Matter (DM) per Acre over the study period. Temperature differences during the first half of the growing season did not affect yield. Precipitation (too much or too little) during this period decreased yield, with yield more affected by wet weather. Environments with extreme temperature and precipitation (either too warm and dry, or too cool and wet) decreased silage yields. 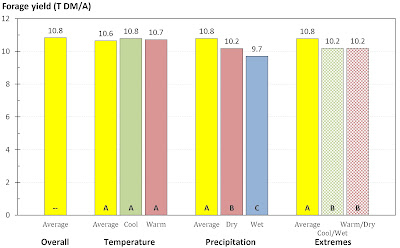 The overall forage moisture of all plots averaged 66% (data not shown) with warmer drier weather between April 1 and July 14 resulting in lower forage moisture. The effect of weather during April 1 to July 14 on NDFD is shown in Figure 2. The overall average was 60%. Cooler and warmer temperature environments increased NDFD over the average. Dry weather increased NDFD while wet weather decreased NDFD compared to the average, especially in extreme years. 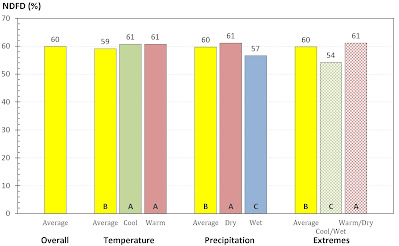 Overall, starch content averaged 29% (Figure 3). Warm dry seasons resulted in greater starch content than cool wet seasons. For all of the years that were classified as warm and dry during April 1 to July 14, significant precipitation fell during the pollination phase of development relieving plant stress. We do not have sigificant silage yield and quuality data for environments like 1988 and 1989 that were significantly drier for longer periods than April 1 to July 14. 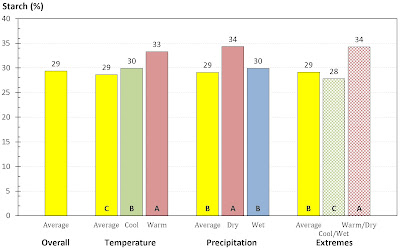 The end result is that warm and dry years tend to have significantly more milk per ton that an average year or cool, wet years. Precipitation either too much or too little during April 1 to July 14 decreases milk per acre more than an average year. Temperature during this period had little effect on milk per acre.

The growing season for 2022 is average so far (click here). A lot can happen yet, so conclusions and predictions using this data are challenging. I present the data to provide a benchmark using previous seasons. Again, the most important management decision from this point forward will be to determine the success of pollination.

What is Killing My Corn Seedlings

Determining Down Force to Set a Planter

Importance of Phosphorus and Potassium in Corn Development

Combine Adjustments and Maintenance for Harvest

Late Season Scouting to Plan for Harvest and Next Season