Soybeans are more susceptible than corn to frost and cold temperatures. The growing point for corn remains below ground until corn reaches about V5 (5 visible leaf collars) growth stage. Comparatively, the growing point for soybean is above ground and exposed to the elements as soon as the cotyledons emerge.

If the main growing point (also called the apical meristem) is damaged, soybeans have a greater ability to recover than corn. Soybean plants can produce new growth auxiliary buds found at each node. When this regrowth occurs from the node where the cotyledons or unifoliate leaves were attached, it has been referred to as psi syndrome due to the shape.

Will the Soybean Plant Make It?

Frost damage to soybean plants can occur when temperatures range between 28 to 32 °F. Temperatures of 29 to 30 °F may be tolerated for short periods of time when soybeans are in the VE (emergence) to VC (unrolled unifoliate leaves) growth stages. Several days of cool temperatures can harden a plant, and when this occurs, temperatures of 28 °F may be tolerated. Complete death (buds, stems, and leaves) is not expected until temperatures remain at 28 °F for an extended period of time for sensitive plants. Soybeans in the VC stage are slightly more frost tolerant compared to soybeans in the V1(first-trifoliate) and V2 (second- trifoliate) growth stages. Soybeans with emerged trifoliate leaves (V1 and V2 growth stages) become more susceptible to temperatures below 32 °F for any extended time.

Patience is needed to determine if an individual soybean plant is likely to survive a frost. It helps to wait a few days before evaluating the potential for new growth at the auxiliary buds. In Figure 1, the plant on the left has been injured by frost for 24 hours and may have tissue death below the cotyledonary node. The plant on the right was injured by frost, but only down to the area above the cotyledonary node, allowing for regrowth from the auxiliary buds at that node. The growth from those auxiliary buds will be similar to that of the original plant had it not been damaged by frost. The odds of the injured plant on the right producing a respectable yield potential are very good. 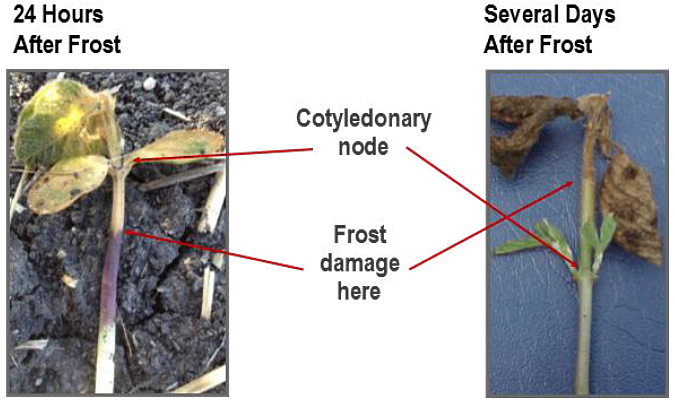 Will the Soybean Plant Make It?

Replanting a field of frost-damaged soybeans demands more consideration since soybeans are more susceptible than corn to frost and cold temperatures. However, soybeans can tolerate stand reductions fairly well. Often, if a soybean stand is evenly distributed, replanting is not recommended unless populations are less than 100,000 plants per acre. As the season progresses, vigilant scouting should continue for seedling blights and environmental damage in soybean fields, especially those damaged by frost.

For additional agronomic information, please contact your local seed representative. Developed in partnership with Technology Development & Agronomy by Monsanto.
Individual results may vary, and performance may vary from location to location and from year to year. This result may not be an indicator of results you may obtain as local growing, soil and weather conditions may vary. Growers should evaluate data from multiple locations and years whenever possible. ©2017 Monsanto Company.120601023004. 051215SEK