For the first 24-48 hours after dry corn seed is planted into the ground, all that takes place is physical imbibition of water into the seed. Water and oxygen move slowly into the kernel through the seed pericarp. Membranes re-hydrate and hormones and enzymes are activated. After the seed swells, enzymes begin to breakdown starch in the endosperm. Sugars supply the embryo with energy for metabolism and cell division.

Imbibitional chilling occurs when membrane re-hydration is disrupted by free radicals before the seed finishes swelling. Cold water is much more disruptive than warm water. Sugars and salts leak from the cells and kernel providing a food source for pathogens and other microbes. It becomes a race for the plant to emerge or death from pathogens.

One of the most dramatic examples of imbibitional chilling occurs with sweet corn. In a study conducted by Bill Tracy (2005), untreated seed of six supersweet corn varieties were exposed to three treatments. Each treatment consisted of one 24-hr period at 40° F temperature and five days at 75° F. Seed was placed in rag dolls with no soil. 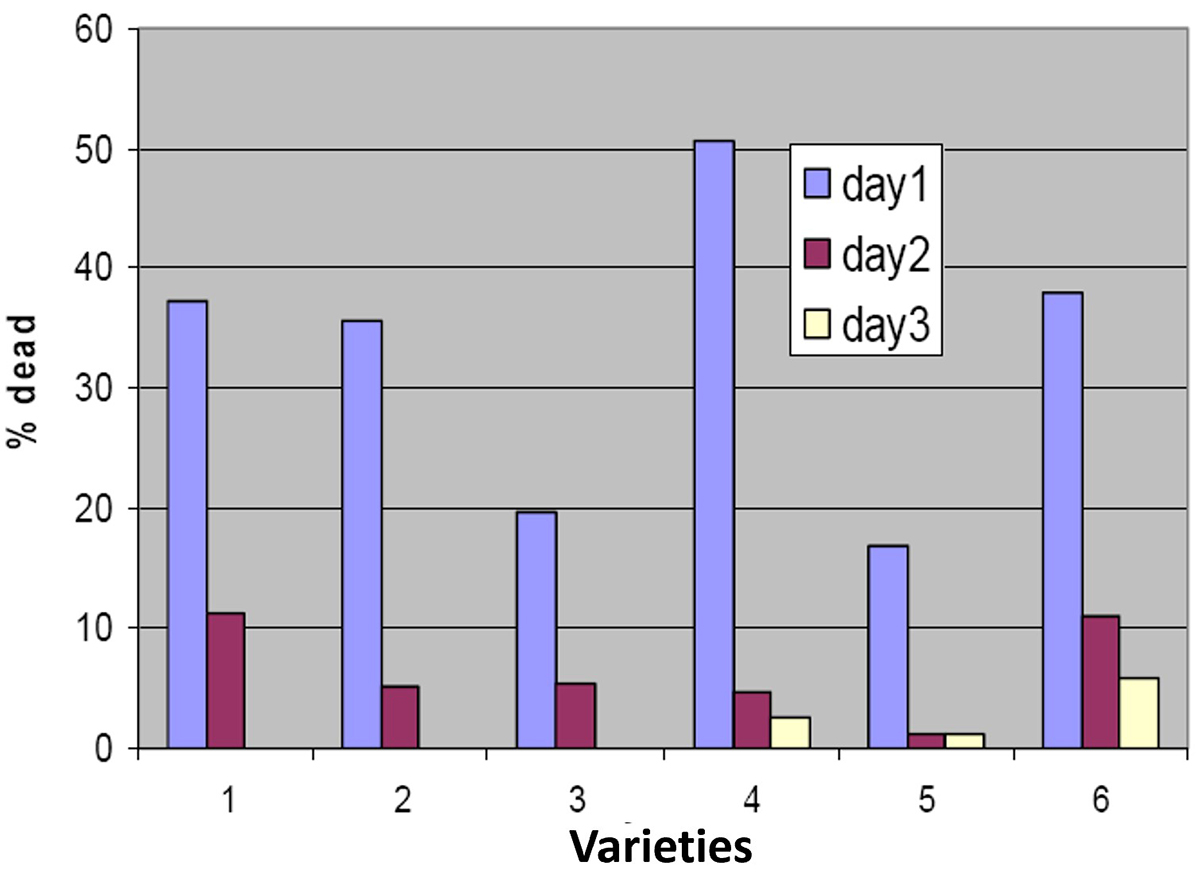 That recommendation is simply not our experience in Wisconsin and likely the northern tier of U.S. states. If we waited until soil temperatures were above 40° F we would need to wait until May in many years (Figure 2). It only gets later as we move north. Yet, our highest yielding planting date are in late April and early May.

Figure 2. Last date when the minimum soil temperature at the two-inch depth was above 40° F at Arlington, WI.

The only time I thought our UW Corn Hybrid Trial plots had been affected by imbibitional chilling was during 2006 at Seymour, WI (Figure 3). I happened to be along on that planting trip. It began to snow after we had finished planting and continued to be cool and wet for the next 72 hrs. We went back to the field a few weeks later and unbeknownst to us at planting, found that the field had shallow swales and a drainfield. Corn emergence was perfect over the drainfield and on the ridges of the swales. However, much plant death occurred between the drainfield spurs and swale depressions. We did not observe standing water, although it could have been another possible reason for plant death. We abandoned the trial due to stand variability. 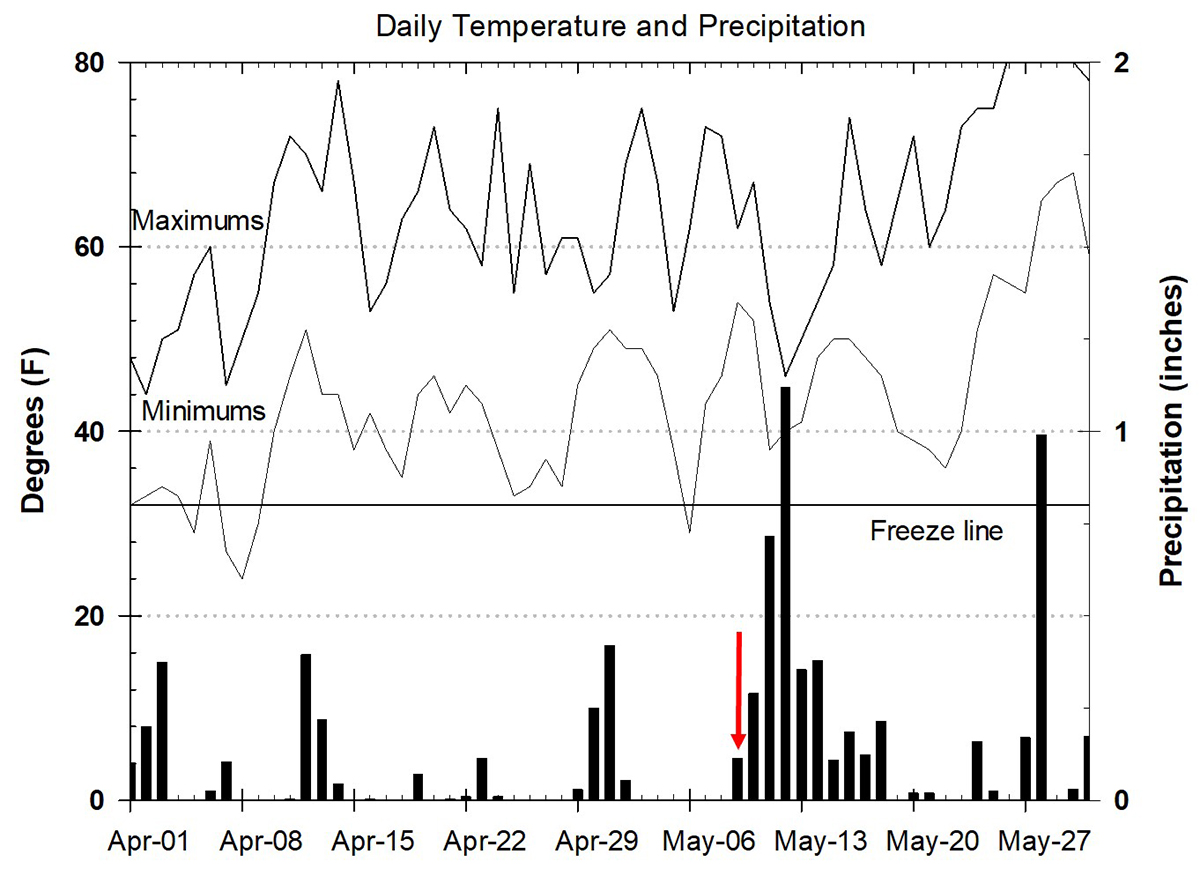 Figure 3. Daily air temperature and precipitation at during 2006 at Seymour, WI. The red arrow indicates when the UW hybrid trial plots were planted.

Our current recommendation for beginning to plant corn seed is, “In southern Wisconsin, plant corn anytime after April 20, if the field is ‘fit’, and after April 30 in northern Wisconsin.” If the short-term forecast is for cold temperatures and snow/rain, then the prudent thing to do is hold-off planting. We have available excellent seed treatments that can protect the seed for the first 30 to 45 days after planting.

This advice we use to plant and establish the UW hybrid trials at 14 locations around the state. We have often had snow on our plots with no establishment and emergence issues. For the last 5 years we have planted a few hundred feet of four hybrids beginning in March and then every 2-3 weeks – we do this to get the planters out and tuned. We do see hybrid differences and in only one case did we see emergence issues for all four hybrids. Remember that insurance coverage does not begin until planting dates after April 10.

Over the past five years or so, we have been hearing stories about fields of corn that show serious yield losses on the edge of the field, specifically on the South and West sides of corn fields, with yields as much as 50 bpa off the rest of the field. I have personally seen yield maps that suggest that this is a reality but explanations have been speculative at best.

Researchers at Iowa State and other universities have alluded to several scenarios that may help explain part of the yield deficiency but several cumulative environmental factors are the most likely culprit. Below are several potential explanations for this relatively new phenomena.

Herbicide drift. In the current ag climate, herbicide drift seems to get the blame for every visible issue we hear about in the country, especially as it pertains to dicamba. We recognize that poor timing of herbicide applications in corn can cause major yield losses. For instance, when Roundup is applied to corn at silking, this can cause roughly 25% of the kernels to abort. This phenomena has also been observed when aerial applications of fungicides with non-ionic surfactants also killed kernels. Could other herbicides be causing stress that lowers yield as well?

Differences in transpiration on the field edge. During the growing season, the middle of corn fields tend to be cooler due to better shading of the ground and higher plant density. As these corn plants respire water, it provides a cooling effect within the field. The edges of the field, however, are less dense and more prone to air movement through the canopy, which diminishes this cooling compared to the middle of the field. We see the same effect in the fall, as corn on the edge of the field is drier at harvest than the middle. Could dry wind blowing at the edges of fields be limiting yield due to more moisture stress as plants try to cool themselves?

West edges historically yield worse. In fields planted in strips of alternating corn and beans throughout a field, growers have seen overall better corn yields than a solid field of corn. Data from the Northeast Iowa research farm have shown when individual rows are measured in these corn strips, the yield of the Eastern most row is substantially higher than the West row in a North/South planting orientation. Over 10 years of research, the bushel difference is a little more than 26 bpa! In these strips, the outside rows generally yield more than the inner rows, to the tune of roughly 90-100 bushel more, with exceptions occurring under severe stress as we saw in 2012 when outside rows have yielded less. Could the West edge of a field just naturally yield less?

In summary, if you are experiencing what you feel are edge of field yield losses, I would consider the potential issues above and suggest a few basic steps to eliminate each as a suspect. First, take a soil sample from the edge of the field where losses are occurring and compare those results to the middle of the field. Secondly, keep track of accumulated heat units as a guide for the growing year; extremely hot and dry conditions will lower yields but, under extreme heat and dry weather, the edge of the field may be hurt worse. This has been the case in Iowa the last 2 years. Finally, be very careful not to spray adjacent fields when your corn is tasseling to avoid stress at that pollination.

July is the pivotal month for corn growing, as growers and seed specialists like myself spend hours watching the highs and lows of each day, hoping to keep the highs below the 86 degree threshold while getting lows below 70 at night to give those corn plants a break. In cases of readily available moisture, these concerns are often not a major issue, but in much of the corn belt in 2021, drought stress has given much cause for concern for our fall harvest.

What are some of these concerns? First, in a lot of dry areas, the amount of corn rootworm beetle pressure is immense. I have been actively trapping beetles since the middle of July and some of the fields are showing an average of 43 beetles caught per plant per day! That is roughly 20 times the economic threshold. These numbers are downright scary thinking about the number eggs that these adults are laying and will be resulting in root-feeding larvae next year. Another threat potentially related to this drought stress and excessive rootworm pressure has me equally concerned for this year’s crop; poor kernel development at the butt of the ears.

Many of you who have been in the seed business for some time have encountered “ear slippage” in the fall. The bulk of the time, growers immediately want to blame the hybrid for their ears lying on the ground, but that is just not the case. One contributing factor to this is drought stress. The shank and ear are anatomically similar to the stalk above the ear attachment. Therefore, it is no surprise that if that portion the stalk is fragile from drought stress, so will be the shank. This year, another stress related cause of possible ear slippage is simply poor pollination of the butt of the ear. Note the arrowed areas of the picture below: overall the ears look filled out fairly well, but the kernel spacing around the butt is irregular. This causes those kernels to grow quite large and wildly out of place. Ultimately they push the ear away from the shank attachment. The result is ear slippage. 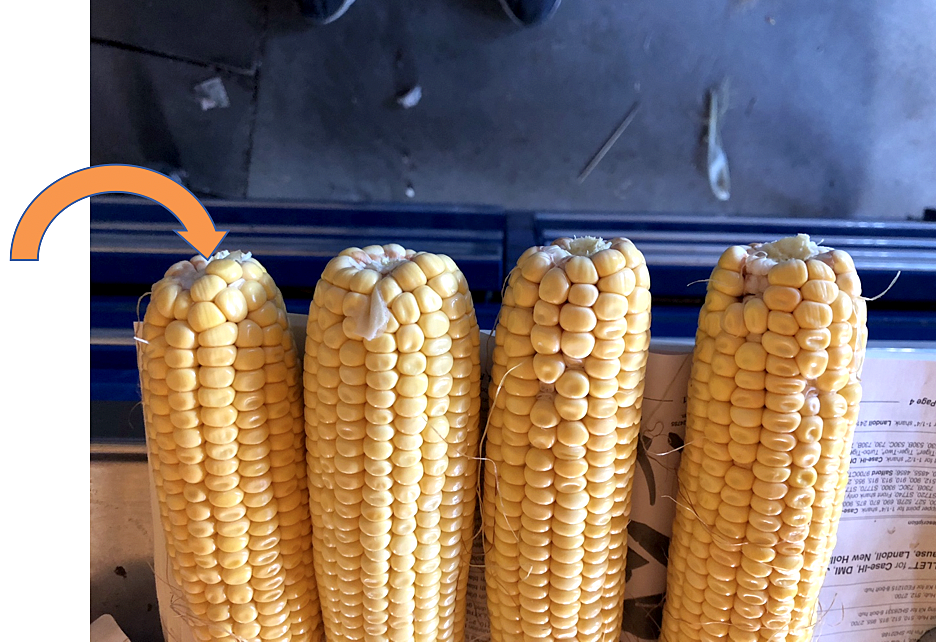 In addition to severe heat and extended drought at this stage of ear development, other factors can influence pollination. These include improper applications of some herbicides, insect feeding on early emerged silks that pollinate these first ovules, as well as poor fertility. Heat stress is usually the major culprit alone, or in conjunction with these other influences.

So what can be done if this is a potential problem? I would strongly encourage growers to spend some time this fall gauging whether or not this could be an issue as well as looking at general stalk quality and then prioritizing those fields for earlier harvest. There is really no solution other than harvesting while the ears are still intact. So check out your fields and put together a harvest plan, or you might feel the pain of ear slippage.